A delegation of mayors, climate scientists, water officials and energy leaders from Sonoma County are representing the Bay Area at this year’s annual U.N. climate conference, known as COP27, underway in Egypt.

They are touting Sonoma County as one of the world’s testing grounds for big climate change solutions — including water-saving ideas and clean energy projects.

Sonoma Clean Power is the public power provider for both Santa Rosa and Rohnert Park. The power aggregator uses renewable energy as its default electricity, sourcing clean power for 87% of Sonoma and Mendocino counties. Geof Syphers, CEO for the agency, is not in Egypt but wants the team to relay a message to other local leaders: Take risks. Be a test kitchen for climate ideas.

“You don’t want to design your trillion-dollar program and have it fall on its face,” he said. “A big part of what I want to pitch is learning from these experiments and encouraging other local governments to run those experiments.”

“The Nature Conservancy’s Power of Place – West” study identified where reconductoring upgrades and use of rights-of-way can meet half the new capacity needed for those states. That would limit additional land needed for rights-of-way for 16 GW of additional transmission capacity to 6,259 miles, only a 7% to 8% increase over current land used for the West’s 86,000 miles of transmission lines. Solar can be planned safely away from wildlife corridors and wind can be built offshore, it added.

“Power providers like Los Angeles County’s Clean Power Alliance, local governments like San Diego County, and private project planners are using these kinds of planning approaches,” Nicole Hill, project lead on The Nature Conservancy said. And the strategies can be applied nationally, as shown by the priority renewable energy zones already used successfully for clean energy in California and transmission in Texas, she added.

Read more here: US can reach 100% clean power by 2035, DOE finds, but tough reliability and land use questions lie ahead | Utility Dive

These contracts represent more than $14 billion in renewable and energy storage projects. They are estimated to support a total 24,000 construction jobs.

“CCAs are procuring the diversity of resources that are needed for the state to achieve a 100% clean electricity system, with a focus on affordability, reliability, and resilience,” California CCA Executive Director Beth Vaughan said in a statement at the end of last week.

CCAs inked a total of 243 agreements for solar, wind, energy storage, geothermal, demand response, and biogas running between 10 to 25 years, with all to be operational by 2026.

This latest annual tally of CCA PPAs—available here—shows California’s not-for-profit community choice energy providers are continuing to secure a robust mix of renewables and energy storage technologies that will facilitate California’s transition to a carbon-free electricity supply and achievement of their own accelerated climate action goals.

The PPAs equate to over $14 billion committed by CCAs to new-build clean energy resources and support for 24,000 construction jobs. Projects totaling more than 4,000 MW are already operational and serving the growing number of CCA customers.

“CCAs are procuring the diversity of resources that are needed for the state to achieve a 100% clean electricity system, with a focus on affordability, reliability, and resilience,” said CalCCA Executive Director Beth Vaughan.

CCAs have collectively signed 243 long-term PPAs for a combined 11,258 MW of new solar, wind, energy storage, geothermal, demand response, and biogas (see totals for each technology type below). The contracts encompass more than 7,900 MW in renewable energy PPAs and upwards of 3,300 MW in energy storage contracts.

Also noteworthy is the growing amount of new baseload geothermal energy in CCA portfolios. This time last year, CCAs had procured 14 MW of new-build geothermal. That total has grown more than twenty-fold to 287 MW this year. A combined 23 MW in demand response resources is another notable addition to this year’s list.

More than 4,000 MW of the projects that hold long-term, new-build contracts with CCAs are already operating; all but one of the remaining projects are slated to come online between 2023 and 2026. The graphic below shows the capacity and types of energy resources procured by CCAs and their online years. 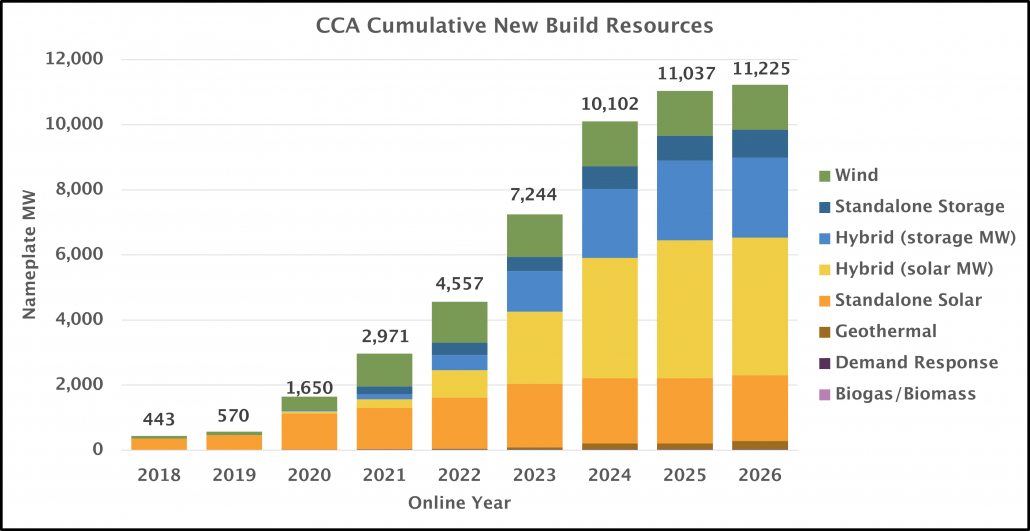 The terms for the CCA PPAs range from 10 to 25 years, or 16 years on average across all contracts. The clean energy resources are helping the CCAs meet their renewables portfolio standard (RPS) and long-term contracting requirements under SB 350, as well as local mandates set by CCA boards.

CCA clean energy projects are located in 27 California counties, from Humboldt County in the north to San Diego County in the south, as well as in the states of Arizona, New Mexico, Nevada, and Utah. A map of project locations can be found here.

CCAs’ annual RPS procurement expenditures increased from $473 million in 2020 to $814 million in 2021, according to the California Public Utilities Commission (CPUC). CCAs inked the majority of new RPS contracts in 2021, compared to investor-owned utilities (IOUs) and energy service providers (ESPs), resulting in a 2021 RPS percentage of 49%, on average.

CCAs are on track to meet and exceed the state’s renewable energy goals. “The CCAs’ generation has increased to keep pace with RPS requirements through 2023, even exceeding the 2023 forecasted target,” notes the CPUC in its latest RPS report. In 2023, the quantity of projects under development is set to quadruple compared to 2022.

This year CCAs collectively served about 33% of the load in the territories of the state’s three main investor-owned utilities (Pacific Gas & Electric, San Diego Gas & Electric, and Southern California Edison). Based on planned CCA launches and expansions, CalCCA forecasts CCAs will serve about 36% of that load in 2023.

A variety of experts from across California expounded on the present and future contributions of microgrids to serve the diverse demands of the energy sector both within and beyond the state’s borders during “Microgrids in California: Opportunities and Challenges for the Energy Sector,” an Oct. 19 webinar hosted by California Energy Markets.

Matthew Marshall, executive director of the Redwood Coast Energy Authority, during the webinar said Ford’s forthcoming F-150 Lightning electric pickup—which, according to the company, could power a home for three to seven days if properly equipped and charged—is likely to change the way consumers think about backup power and distributed resources.

RCEA, a community choice aggregator in Humboldt County, earlier this year launched the Redwood Coast Airport Microgrid, a front-of-the-meter, multicustomer microgrid that delivers power via Pacific Gas & Electric’s distribution system. The 2.2-MW solar array paired with an 8.8-MWh battery provides wholesale power to RCEA customers and, when islanded, up to several months’ worth of uninterrupted power for the airport and a U.S. Coast Guard station.

Peninsula Clean Energy and Renewable America are announcing a new solar project that will provide emission-free power to disadvantaged customers in San Mateo County and the City of Los Banos.

The Dos Palos Clean Power project will generate 3 MWAC of solar power as part of Peninsula Clean Energy’s Green Access Program, which is providing more than 1,000 income-qualified customers in San Mateo County and the City of Los Banos with a 20% savings on their electric bills.

In an event that served to tout both the federal Inflation Reduction Act and Sonoma Clean Power’s Advanced Energy Center, Rep. Mike Thompson took to the rostrum Tuesday to urge the public to take the opportunities at hand to heart.

The landmark bill includes $369 billion to lower carbon emissions and fight climate, including tax incentives that lower financial barriers to electric vehicles, rooftop solar panels, geothermal heating, energy efficient renovations, solar storage batteries and the like — much of which can be researched and purchased through the Advanced Energy Center opened on Fourth Street last year by Sonoma Clean Power.

Developed with a $9.8 million grant from the California Energy Commission, the center offers demonstrations and purchasing information on a host of low-carbon technologies, appliances and tools — everything from induction cooking ranges to all-electric chain saws, high-efficiency heat pumps and electric vehicle charging devices.

“This is an amazing spot, where you can walk in the door and you can see firsthand all the different products that you have access to that will actually help us deal with the climate crisis in addition to lowering your energy costs and improving your life,” Thompson said. “And everything is here, under one roof, and you can get the advice that you need and see firsthand what these things are.”

In 2021, 30 utilities and 15 community choice aggregators spent $12.3 billion, or 31.2 percent of their combined total budgets, with companies certified as women, minority, disabled-veteran or LGBT business enterprises (WMDVLGBTBE), the CPUC said at its Oct. 13 en banc.

This exceeded state goals and was a year-over-year increase of 1.1 percentage points, up from 30.1 percent in 2020.

Once challenge is that CCAs, which are public agencies, are prohibited by Proposition 209 from contracting based on WMDVLGBTBE status. IOUs can ask for this information before signing a contract.

But there are plenty of opportunities for CCAs to tackle these issues head-on. Alexandra McGee, manager of strategic initiatives for MCE, said one of the key issues identified at last year’s en banc was how to get more people through the door to address the challenge of diversity. MCE is in its fourth year of offering its “Certify and Amplify” event, designed to provide assistance with the CPUC certification process to qualified local businesses.

Weisz is CEO of Marin Clean Energy, a not-for-profit that provides electricity from renewable sources to more than 540,000 customers in Marin, Napa, Solano and Contra Costa counties.

These days, she and her organization face a number of challenges such as a changing climate, like the blistering hot days in September which pushed the entire state grid to the brink of blackouts. In addition, the state ban on gas-powered cars. That means more demand for power as more people plug in vehicles to recharge.

MCE reports it has spent $62 million on local renewable energy projects since its inception. Of the 900 megawatts of renewable power in California that was constructed just for MCE, 49 megawatts are generated in its four-county service area with the other coming from alternative energy sources in the Pacific Northwest and California.

“To create change I need to do my best to make sure my community and world are in balance and healthy as possible.”

Stockton residents will soon be switched over to a new energy provider with opportunities to save money and go green.

Stockton City Council voted unanimously at the Sept. 13 council meeting to join the East Bay Community Energy Authority, an alternative to Pacific Gas and Electric that gives residents the choice to save on their energy bill or source their power from 100% renewable resources.