The clean energy buying spree by not-for-profit community choice energy providers aims to ensure California has the electricity supplies that are needed to cost effectively meet near- and long-term reliability and clean energy requirements and to achieve their own accelerated climate action goals.

Notably, almost all of the solar contracts signed by CCAs in the last year are “hybridized,” meaning the solar facilities will be co-located with batteries that can be charged with sun power and discharged at times of peak demand to boost reliability. CCAs have to date contracted for more than 6,100 MW of solar, and just over 4,000 MW, or about 66 percent, is paired with energy storage.

The clean energy projects are located in 28 California counties, from Humboldt County in the north to San Diego County in the south, as well as in the states of Arizona, New Mexico, and Nevada. A map of project locations and a list of contracts can be found here or by clicking the map below. 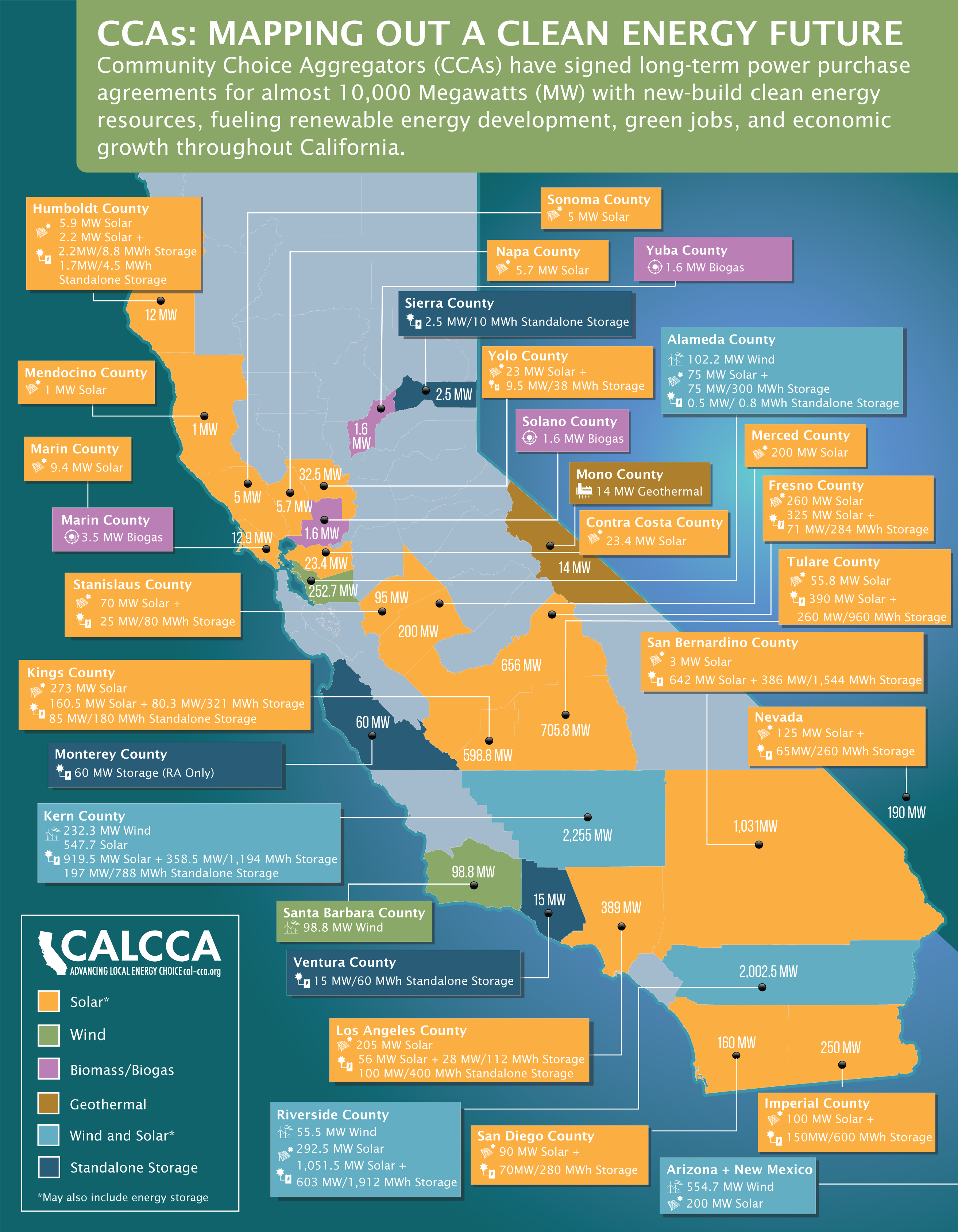 Several of the projects are already operating, while others will come online between 2022 and 2024. The graphic below shows the capacity and types of energy resources procured by CCAs and their online years. 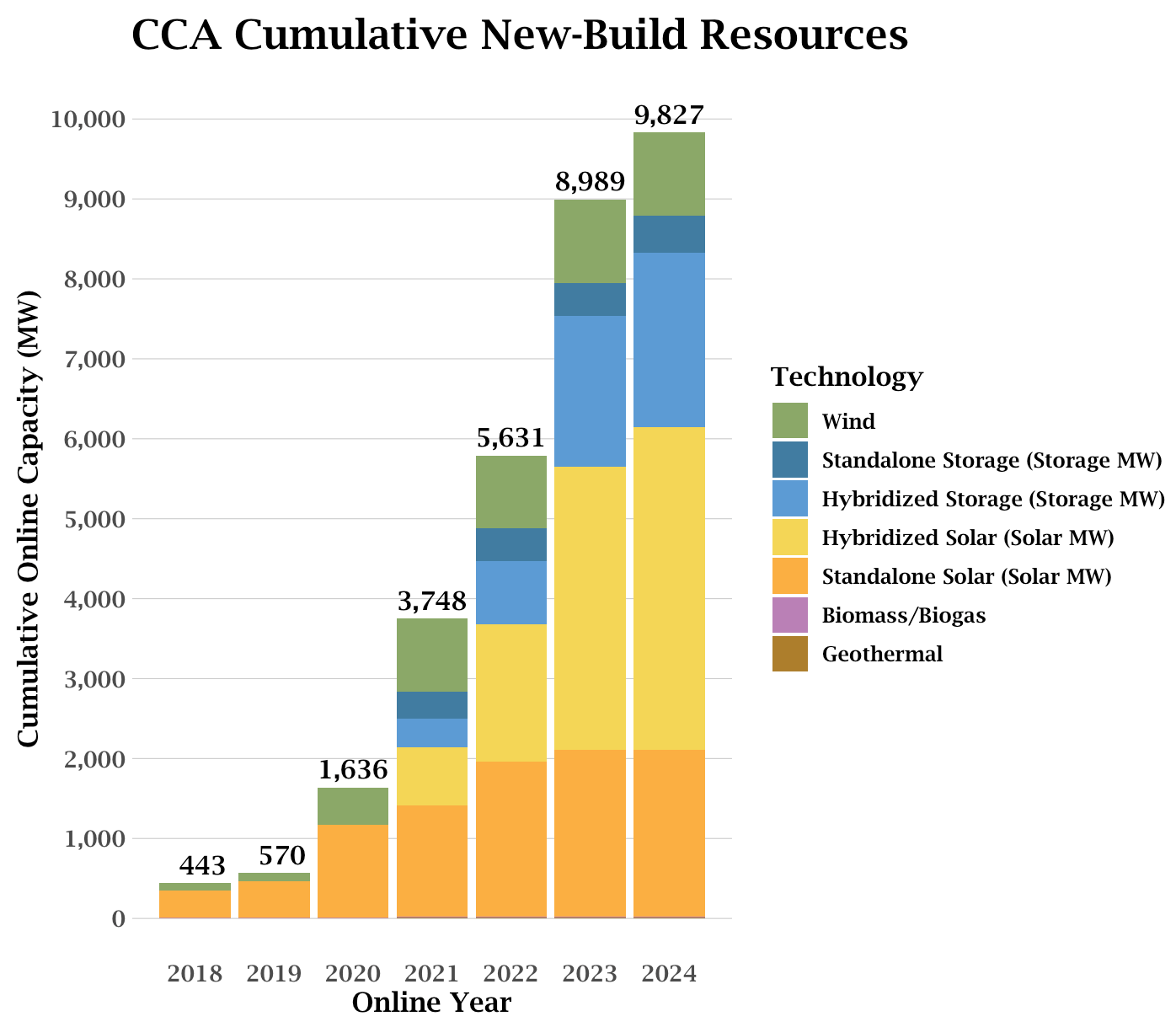 The terms for the 162 PPAs range from 10 to 25 years, or 17 years on average across all contracts. The clean energy resources are helping the CCAs meet their renewables portfolio standard (RPS) and long-term contracting requirements under SB 350, as well as local mandates set by CCA boards.

CCAs’ total annual RPS procurement expenditures increased from $385 million in 2019 to $491 million in 2020, according to the California Public Utilities Commission.

CalCCA recently received a Green Power Leadership Award from the Center for Resource Solutions in recognition of the outstanding leadership role California’s CCAs are playing to build and grow the voluntary market for renewable energy. Over the last decade, CCAs have purchased more than twice as much renewable energy than was required under state mandates, according to the UCLA Luskin Center for Innovation.

The California Community Choice Financing Authority (CCCFA), meanwhile, was formed by CCAs to reduce the cost of power purchases through prepayment transactions. CCCFA will assist member CCAs by undertaking the financing or refinancing of energy prepayments with tax-advantaged bonds.

As of 2021, CCAs serve over 50 gigawatt-hours (GWh) of load, representing about 28% of the load in the service areas of California’s three main investor-owned utilities (Pacific Gas & Electric, San Diego Gas & Electric, and Southern California Edison). Based on planned CCA launches and expansions, CalCCA forecasts CCAs will serve 36% of IOU load in 2022.

About CalCCA
Launched in 2016, the California Community Choice Association (CalCCA) represents California’s community choice electricity providers before the state Legislature and at regulatory agencies, advocating for a level playing field and opposing policies that unfairly discriminate against CCAs and their customers. There are currently 24 operational CCA programs in California serving more than 11 million customers. For more information about CalCCA, visit www.cal-cca.org.