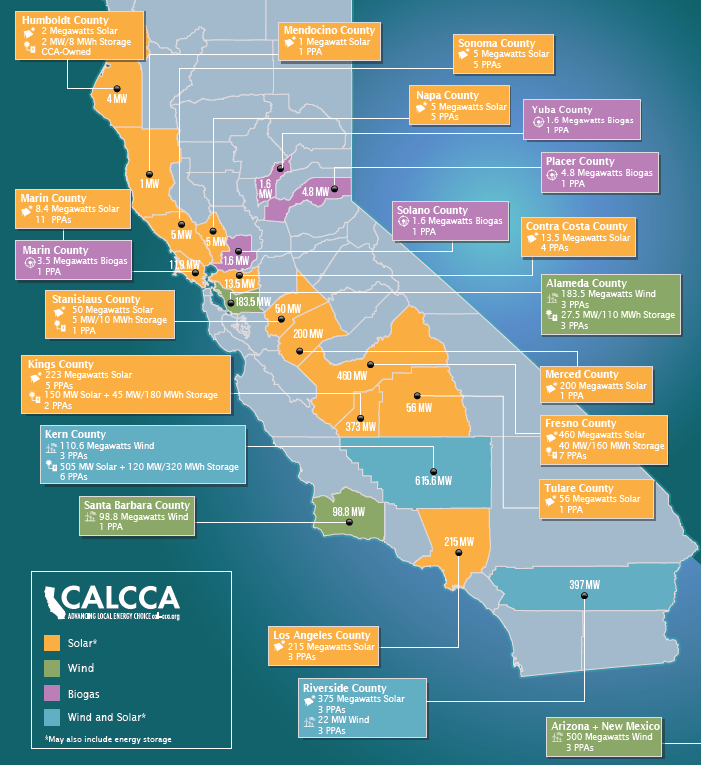 “CCAs are continuing to rapidly secure the clean energy resources California needs to meet ambitious decarbonization and climate change goals,” said Beth Vaughan, executive director of CalCCA. “At a time of unprecedented change in California’s energy sector, aggregators are providing stability, accountability and leadership when the state needs it most.”

In addition to securing renewable energy PPAs totaling 3,195 MW, aggregators have also signed long-term battery energy storage contracts for 239.5 MW/788 Megawatt-Hours (MWh) combined, with more than half – 149.5 MW/438 MWh – contracted for in the last year alone. Of the total, 212 MW/678 MWh, or about 86%, is co-located with solar panels that will charge batteries with sun power – energy that can be discharged at times of peak demand and to provide grid stability.

CalCCA announced the 3,000-MW milestone at the association’s Fourth Annual Meeting in Redondo Beach, where more than 450 attendees are gathered to discuss the latest developments in California’s energy market, and the key role community energy providers are playing in the state’s efforts to address climate change. Last November, CalCCA announced that CCAs had achieved a 2,000-MW milestone for long-term PPAs. In fact, aggregators have added approximately 1,000 MW in each of the last three years.

California’s CCAs have to date signed a total of 76 PPAs with new solar, wind, biogas and energy storage facilities, up from 59 contracts in November 2018 – a nearly 30% increase. The contract terms range from 10 to 25 years, or 18 years on average across all contracts.

The clean energy projects are located in 19 California counties (up from 17 in 2018), from Humboldt County in the north to Riverside County in the south, with one project located in Arizona and another in New Mexico. Several projects are already operating, while others will become operational between 2019 and 2022. A map of project locations and a list of contracts can be found here.

Several local projects have been added to the list in the last year. East Bay Community Energy, for example, signed a trio of local battery energy storage contracts to facilitate the shutdown of a fossil fuel-fired power plant in downtown Oakland. The Redwood Coast Energy Authority, meanwhile, is developing a local microgrid project at the California Redwood Coast – Humboldt County Airport. RCEA will own and operate the microgrid’s solar and energy storage systems.

Aggregators are expected to make long-term investments in more than 10,000 MW of new clean energy resources including solar, wind, geothermal and energy storage by 2030, and several CCAs are currently in the process of procuring new clean energy resources. To stay on top of CCA procurement news, sign up for CalCCA’s mailing list here. PDF of this press release is here.

About CalCCA: Launched in 2016, the California Community Choice Association (CalCCA) represents California’s community choice electricity providers before the state Legislature and at regulatory agencies, advocating for a level playing field and opposing policies that unfairly discriminate against CCAs and their customers. There are currently 19 operational CCA programs in California serving approximately 10 million customers.