“I want to thank CalCCA for this honor and for the important work they do,” said Senator Portantino. “As we collectively step up our efforts to position California as a world leader in fighting climate change, it’s important to continue reshaping the energy landscape. “Local governments through CCAs are innovating and driving much of the change we need to reach our climate goals.” he added. 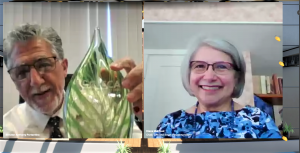 Senator Portantino receives the 2021 CCA Champion Award from Clean Power Alliance Chair Diana Mahmud at CalCCA’s Virtual Annual Meeting on December 1. You can watch the presentation of the award here.

Mahmud noted that Portantino has been a fierce and effective advocate for SB 612, a ratepayer equity bill that aims to ensure all California electric customers have fair and equal access to benefits associated with investor-owned utility (IOU) legacy energy resources. SB 612 has bi-partisan support and more than 100 California communities, environmental justice organizations, environmental groups, and clean energy providers back the bill.

“He’s been an incredible advocate,” Mahmud said. “I remember him saying, ‘we’re not going to take a pillow to this fight.’”

Beth Vaughan, executive director of CalCCA, hailed Senator Portantino as an “unwavering advocate and relentless protector of local choice, demonstrated by his authorship and work on SB 612.”

“The Senator fought tirelessly to advance important customer fairness legislation for the more than 200 communities across California that have chosen community choice aggregation to advance local energy decisions and taken the lead in confronting our climate crisis,” Vaughan said. “We are honored to have him as a partner.”

About CalCCA
Launched in 2016, the California Community Choice Association (CalCCA) represents California’s community choice electricity providers before the state Legislature and at regulatory agencies, advocating for a level playing field and opposing policies that unfairly discriminate against CCAs and their customers. There are currently 24 operational CCA programs in California serving more than 11 million customers. For more information about CalCCA, visit www.cal-cca.org.